It is a conventional wisdom: peer-to-peer storage works for distributing of popular items. A torrent swarm is never more efficient than when delivering the latest episode of Game of Thrones.

But there is another usage of peer-to-peer networking that is almost the opposite – inbound swarming. This idea was originally suggested by Robert Novak while he was at Nexenta, but many details have been flushed out since then. An inbound swarm is quite unlike a Game of Thrones swarm: it carries a horde of distinct files that are bound to only one destination, and most will never be accessed.

The use-case is simple: imagine that you have a very large number of people generating content at a location with limited upstream capacity. The “limited” capacity can be quite high, it just has to be limited relative to the demand.

If the use case is not clear, consider a technical conference at the Moscone Center (or any venue). Or consider a sporting event that wasn’t built with a WIFI router for each row of seat. In either case you have a lot of content being generated by smartphones and tablets, a lot more content than can be transmitted live from the venue.

Peer-to-peer networking can provide a backup service to these mobile devices tailored exactly to these scenarios.

Basically, the mobile devices back each other up. But this needs to be automatic, between collaborating users without relying on negotiating trust on an individual basis.

To establish this trust the application would have to:

Once the trust issues are solved there is more than enough bandwidth within a Conference center, and more than enough storage for all the content being generated. Content just needs to be held on multiple devices until the bandwidth is available to deliver the blob to its ultimate destination.

Pieces of this solution have been around for a long time. Routing schemes exist for ad hoc networks that are dynamically discovered. Store and forward relay is as old as email. But this solution is actually far simpler than either of those. Each replica is stored on at most one intermediate device, and is forwarded at most once. The only ad hoc network used is at the source venue. Forwarding would be limited to known “home” Wi-Fi networks that are connected to the Internet. 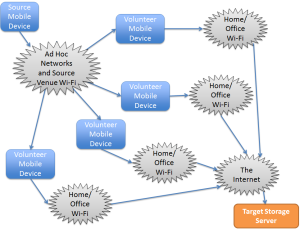 So this is essentially a mobile “crowd-sourced” backup  system that is specifically tailored to the needs of files generated by mobile devices, such as photos of presentations at a conference, or photos of friends together at a convert, etc.

The goal is to provide backup replicas that are retained for perhaps half a day. There is no need for long term storage. Rather than seeking to distribute replicas to many destinations, it instead seeks many paths to a single destination per object.

The biggest gotcha with this idea is that it really takes a Mobile OS vendor to properly enable the on-site file transfers. There isn’t any incentive for users to download a “CrowdSharing” app unless they are likely to encounter other devices with the same App installed.

Without critical mass this doesn’t work. Do you remember the Zune’s Wireless Sharing feature? It would have been a big plus, if you ever ran across other people with Zune’s to share with.

So this is a great potential application, but realistically it probably will not go anywhere unless embraced by Google and/or Apple.